Recently, I've been playing a type of puzzle called Battleship Solitaire. Basically, this type of puzzle involves a battleship grid, and numbers along the sides of the grid. Based on these numbers, you are supposed to work out the locations of the ships.
In principle, the game works out to be similar in some areas as Paint By Numbers, and hence some strategies which I discovered earlier were viable for this game too. However, this game is probably (at my present skill level) partially dependent on luck, since some puzzles I played were ill-posed, having 2 possible solutions. Of course, this is almost certainly due to the puzzle generator, which does not check for the uniqueness of the solution.

Some sample shots of a new game and a solved puzzle follow. 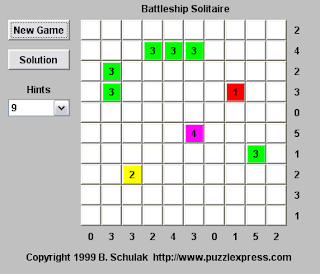 A puzzle with 9 starting hints. 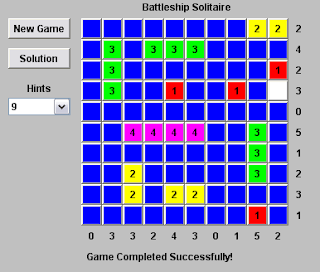 The rules of the game (copied from this website), for reference, are :

The computer hides the ships in the grid and a few 'shots' will be fired into the grid to get you started (Hints). The ships will be hidden in the grid with the following rules.
Posted by The Negative Man at 6:35 PM