The Amazing Tale of Intrigue 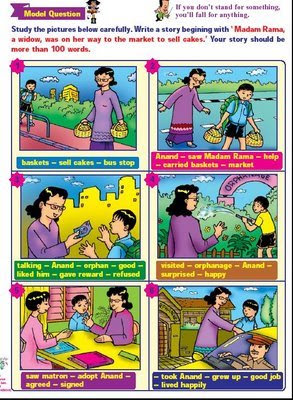 The wicked witch had run out of her supply of children and was feeling hungry. Due to the poor economic climate, buying children off the market was costly, and so the witch decided to do things the old way, which was to catch some.

After breaking off two large baskets of sweets from her candy house, the witch moved to the traditional kid-luring location. The efficacy of the bait amazed even herself, as a child lunged towards her before she even reached the location.

But it was not to be! The child was not prey, but predator! The brave blue boy stunned the witch with a leap attack, and carried off the two baskets of lures. The unprecedented attack shocked the witch - could this boy be the fabled witch-slaying hero? The witch recalled the many cases of mysterious witch-deaths, such as one dying after "accidentally" climbing into the kitchen oven, and another being crushed to death by a falling house.

No chances could be taken, the crone thought. Cackling, she took out a spell scroll, disguised as currency, from her purse. She started chanting the activation words, but the child-hero acted swiftly, using kungfu to interrupt the spell. He focused his internal energies into his palms and blasted the witch. The power of the spell and the energy blast mixed together, and neutralized each other.

Her spell neutralized, the witch had to use the last resort, which was also kungfu. She raised her palm to attack, but her actions were far too slow. The child-hero had the time to change his clothes, and to take out a hose and spray water over the witch. The witch writhed in pain, as all witches were weak to water. One notable relative living in the west was even slain by immersion.

The child-hero took the witch back to the secret headquarters for interrogation. This move would prove to be a mistake, since there was a secret double agent in the organization. The boy was caught unawares by a sneak attack and was defeated.

The witch took the boy back to her candy home, where she intended to cook the boy. Unexpectedly, a deus ex machina happened, and a taxi popped out from empty space. Riding inside it was Captain Mustache, one of the most famous superheroes in the world. The greatest battle of the century was about to begin...
Posted by The Negative Man at 12:51 PM