But they do not. In fact, even afghan farmers wielding shotguns against Apaches have better success rates than the Decepticons. This outcome is most puzzling, since modern military strategy would indicate a Decepticon victory over the Autobots.

Firstly, the Decepticons have far superior mobility. This alone should be able to compensate for numerical inferiority and inferior firepower (although I could never understand how fighter jets could be more poorly armed than cars and vans). Mobility allows for the Decepticons to select their battles, and more importantly, to avoid unfavorable ones. In order to maximise this mobility advantage, they should engage in i) hit and run operations ii) resource raiding operations.

Secondly, since the Decepticons have a secret undersea base, this allows them to employ the two tactics given earlier to the greatest effect. The secret base allows the Decepticons to be permanently on the offense, and to spend no resources on defense. Furthermore, given the inferior numbers and firepower of the Decepticons, any such defence would be futile. 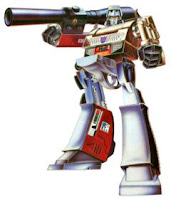 Of course, given such advantages, why did the Decepticons not achieve victory ? I believe that the answer lies in Megatron, the Decepticon leader. Megatron transforms to a gun, not a fighter jet, and hence is unable to comprehend the correct set of tactics to attain victory. This is most evident in his tactics, which can be summed up in the words "Charge !" and "Retreat !".
Posted by The Negative Man at 9:42 PM