Assume you are playing a new game in a foreign language. Now, there are many actions you can do in the game, but since the instructions are all in weird runes you can't really know the effect of each action. All you know is this- some actions reduce your score, and some actions increase your score. There are a few other people playing the game, but none save the host seem to be able to read the language. The host seems very disinterested in teaching everyone the game, and just murmurs a few words here and there when "explaining" what some actions do.

Under such circumstances, what action would be the most optimal? It might be entirely valid to act according to your interpretation of the host's crappy instructions. Alternatively, you could follow the crowd, and adopt the set of actions that everyone seems to play; surely that would be a safe move, to adopt the wisdom of the crowd? Or, in the absence of any real information, and knowing the possibility of negative scoring actions, would the best move be to not play any actions?

What a pointless game, you might think. But is it really so? I sometimes think that morality and ethics is such a game. It is clear that not everyone agrees on what is the most moral or ethical. Right and wrong are often argued about, sometimes with little agreement.

Should one act upon one's convictions, to trust one's moral compass, regardless of what others think is right? Is this not unlike the first strategy in the hypothetical game earlier, relying on one's understanding and interpretation which too can be flawed?

Or, would it be wiser to act according to the norms of the day? People ought to know better, but is that not a problematic assumption? It has led to startling travesties in history- at least, judged from our own dubious perspective.

Now, if one admits to knowing nothing, then perhaps one might choose to do nothing. Though nothing good is done, but hopefully nothing bad is committed. At least, if one does ignores the "if good men do nothing" idea.

My thoughts are that the first type of people would either commit great good, or great evil (if the problem of judging morality was to be sidestepped). The second seems to be a lazy and irresponsible approach, though it is also most often irreproachable. The final type seems to be overly passive, but I am attracted to its agnostic and neural nature.

Of course, if the unmarked game were to occur for real, a wise crowd would evict the host, and agree on a best way to understand, interpret, and play the game, to hell with the original rules which might never be known or revealed.
Posted by The Negative Man at 11:47 PM No comments:

While I was borrowing a book at the lending machine in the local library, I spied a poster on the wall. I studied it for a while, all the time thinking "Something's not right!". I reproduce the poster in the following image, also available at their website. 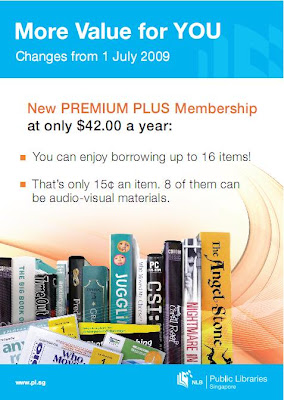 Now, I must admit that I'm not an authority on advanced mathematics, but I can't quite figure out how the sum of 15¢ an item was arrived at. If we were to divide the sum of $42.00 by $0.15, we would get 280 items, which is clearly not the borrowing limit. Even after including the loan duration, it seems impossible to arrive at 15¢. I would challenge the reader to solve this most amazing problem.

In any case, my opinion on the premium membership is that it is mostly a waste of money. The increased borrowing limit is largely moot, being merely a convenience- remember the situation of a small cup vs a large cup when both have unlimited refills. Perhaps the only justifying point is the ability to borrow audio-visual materials, but at $42 much use would have to be made of it.
Posted by The Negative Man at 8:30 PM No comments:

Sketch is set in the modern era. Two men are seen talking.

A: I haven't seen you around lately.

A: What! How are you doing it? Is it prostitution? Are you paying money for sex?

B: Well, yes and no. The method is simple, really; I provide food and shelter while the woman provides sex.

A: What! That sounds just like prostitution, except that there's a meal plan thrown into the job entitlements package.

B: No, no, no! The woman also does some menial household chores; it's less of prostitution than general indentureship with a specific clause for coital services.

A: It sounds expensive-

B: No, not really. I'm getting it all in a package-deal sort of thing so it works out cheaper than if I hired a sexual worker every other day. It's quite a steal actually.

A: Hmm, if you're getting a good deal, then someone must be being ripped off somewhere. Clearly any sane woman with any mathematical inclination can see that it is vastly more profitable to leave things to the open market than to adopt this contract.

B: It's not all peaches on my side too. You see, the contract is lifetime-binding; I'll have to provide her upkeep for the rest of my or her life, so at some point this contract becomes more of a liability than a bargain. But I'm getting my lawyer to go through it for any loopholes so that I can divorce myself of any consequences when the time comes.

A: Well, hopefully you succeed. It does sound like a good idea. Any plans to patent the idea and to market it?

B: Of course I have a mind to make some cash off this. I've even been thinking of a name for it- the name's meaningless now, but hopefully when more people know about it it will gain an essence of its own. I call it - Marriage.

This sketch is still vastly rough; I'll have to polish it up, maybe add a few twists. There are still some directions that I want to go with it. In the meantime, feel free to add any comments on the sketch.
Posted by The Negative Man at 11:36 AM No comments:

Bittorent file sharing communities are set up such that files can be shared more efficiently ; selfish agents that download but do not upload can be detected by their poor upload ratio and banned from the community.

If however the sharing rule is temporarily waived for new agents, say for the first week, then it is possible for everyone to be altruistic, barring new agents. However, this requires a continuous stream of new agents joining the community, which is unfeasible in the extreme run.
Posted by The Negative Man at 7:11 PM No comments:

According to a BBC article, China's new "Green Dam Youth Escort" software, intended to serve as a filter for offensive material (such as pornography), has some classification errors. In particular, it was reported that

I went on the internet to check out some animal photos. A lovely little naked pig was sent onto the black list. Pitiful little pig!," read one comment.

"I was curious, so I looked up some photos of naked African women. Oh, they were not censored!

which is amusing to say the least.

The comments do suggest that a key component of their pornographic classifier involves color, specifically the proportion of skin-colored pixels, though this approach apparently has its weaknesses.

Having some experience with image processing as well as classification, there are a few other possible approaches to constructing a pornographic classifier. Rather than using only color information, it might be advisable to perform object recognition to search for a few key areas of interest, i.e. exposed private parts. A combination of shape (since the outlines of some private parts are considerably unique) and color information should be able to identify these body areas with some effectiveness; alternatively, standard object recognition techniques can be used, though these may be more suitable for the specific rather than the general.

Another approach (which is simpler and less accurate) may be to use the color information to generate an outline of the human frame (by segmentation), and to then see how many colors are contained in the frame. The theory is that many colors indicates the presence of clothes; the advantage is that one is unconcerned with the actual skin color itself. Of course, the issue is that whether the segmented region is human- this in itself is a worthy sub-problem, though one workaround is to identify a head region, and if there is none it is not a human.

Generally, though, the problem of creating a classifier to identify pornographic images is considerably difficult. The above ideas may be suitable for images with only one human subject, but the classification task can be made much more difficult by other complications. Such complications include multiple subjects and non-realistic images (i.e. computer generated images or drawings). In fact, circumventing such pornographic classifiers may be extremely simple indeed.
Posted by The Negative Man at 9:56 AM No comments:

I like taking showers before sunset, though explaining why requires a bit of a long tale.

My electric water heater has 4 settings, low, medium, high, and off, and as it often is with factory settings, my preferred setting lies somewhere in between the factory ones. In this case, the low setting gives water that is just a bit cooler than I'll like, while the medium setting is warm but the higher temperature tends to dehydrate the skin. The best things are always in between.

Now, here's the part about the sunset showers. As it is, I live in a high rise apartment, and at a level that is almost near the top floor. For all high rise apartments, water from the piped supply will be pumped and stored in a water tank at the rooftop. This water will subsequently rerouted to the apartments by gravity.

Thinking back, this was not the first time I've encountered this solar heating effect. A few years back, when I was still an army recruit serving BMT (basic military training), I found that if I managed to rush into the showers first when the sun was still up, the water would be reasonably warm (or at least, not unheated, as it would have been otherwise). Of course, there weren't many opportunities to capitalize on the knowledge, for training usually ending in the late evenings.
Posted by The Negative Man at 2:07 AM No comments: