On the General Uselessness of Anecdotal Evidence

The basest level is hearsay, where the evidence is not experienced firsthand or with proof of veracity. It suffices to say that the truth of such evidence is in doubt, much less any general conclusions which may be drawn from it.

The next level is evidence experienced firsthand, but of which the impact is greatly and improperly amplified by our innate cognitive biases. The availablity heuristic modifies our expectation of an event's frequency based on how salient the event is in our mind. Often, the perceived frequency deviates significantly from the true frequency.

The top level is evidence experienced firsthand, but without cognitive bias. You may ask, what could the problem possibly be, since the evidence is both true (being observed firsthand) and free of mental bias. The problem is that anecdotal evidence is implicitly a local measure of things, and not an indicator of the larger and true picture.

The interesting thing is, nobody is wrong or lying; everyone's anecdotal evidence is correct. The town is a salt lattice, where each atom is surrounded by 4 atoms of a different type. In actual fact, the ratio of NA:CL is 1:1. 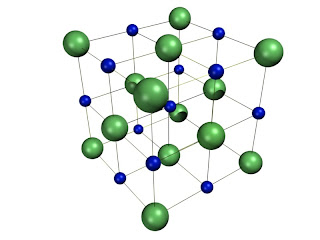 Anecdotal evidence is a mental shortcut for making quick decisions. However, as shown by the NaCl example, it may not be wise to draw generalized conclusions based on such evidence.
Posted by The Negative Man at 11:43 PM