Behind the scenes : Polling Day

A few weeks ago, I did an odd job which required me to set up polling centers for the elections. Basically all I did was to follow the instructions of the polling center IC's and put up the barricades(consisting of the tape and netting barrier) around the perimeter.

After some time, it was increasingly obvious that some (many?) of the polling center IC's were either idiots or inflexible robots capable only of following instructions. They were insistent on setting up the barricades in manners which were clearly nonsensical to observers. 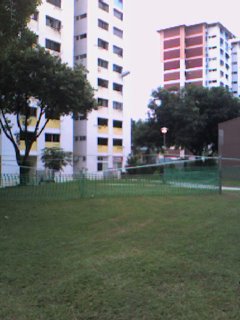 The tree in the picture must have been extremely important to the polling process. It was barricaded entirely such that nobody could gain access to it. Without any doubt, this was a critical installation which needed protection.

Other instances of inanity were :
i) blockading the rubbish chutes (Apparrently, the rubbish collectors don't work on polling day).
ii) blocking off some stairways (Residents have alternative ways to access their homes, such as some other obscure stairways, rappelling or voting for elevators to be built).

It worries me to think that many of the polling center people responsible for these acts were civil servants, teachers especially. Many of them were highly insistent on following the instructions for a secure polling center, while ignoring totally how this would affect the residents near the center.

Independent thought is going to the dogs.

Posted by The Negative Man at 5:16 PM