What are the most commonly encountered numerical digits? On first thought, it does not seem that any particular digit ought to be favored, as numbers seem to be randomly distributed; however, in fact some digits are more common than others.

I recently took a photograph of a used calculator lying around in my house, which should provide an instructive insight into the answer. 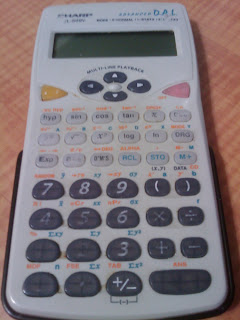 The wear patterns on the calculator suggest that the lower digits are used more often, in particular 0 and 1. Possible explanations for this distribution include Benford's law, which proposes that if one compiles several sources of real world data, the most common leading digit is 1; whereas for 0, it may appear often after rounding to a significant figure.

PS: I also wonder whether people would be capable of immediately determining the digit configuration if all the digits were non-visible due to wear.
Posted by The Negative Man at 8:59 PM