There will be a live action movie for Transformers. It will be released in one year's time (on Independence Day).

Of course, I think that a live action Transformers movie is almost going to disappoint. But thankfully the robots themselves are not going to be done with actors in boxy suits - that'll certainly cause fans to roll over with mouths foaming- but rather CGI. Still, don't expect too much. 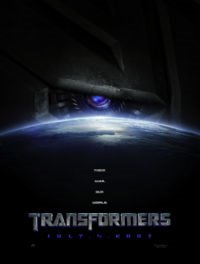 This absence of detail is also reflected in the movie teaser (a pre-trailer, if you will). I think the producers are deliberately keeping all the things secret. In fact, according to the wikipedia article, even the cast of robots is being kept secret.

Hopefully this wasn't done because they did something stupid (like renaming the transformers or changing their robot modes). Anyway the movie teaser can be found at the movie website here.