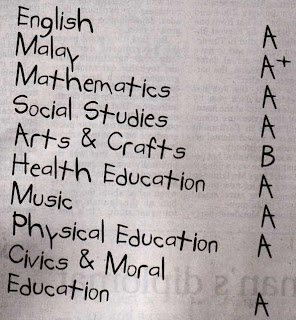 By now, everyone must have seen the ad for the Straits Times School Pocket Money Fund. The ad itself is simple, comprising of a report card of an underprivileged student. What interests me, however, is the possible subtext of the ad itself.

There can be little doubt that the reported grades are good, since all but one of the subjects scored at least an 'A'. However, this itself draws attention to that one odd subject. Why was there a 'B' grade in the report? Would that not diminish the persuasiveness of the ad itself?

I have a possible explanation. A report card comprising of all A's would not be too convincing or credible, or worse, might reek of the elitism which we all are wary of. The 'B' grade acts to make the student appear more falliable and more human, and thus, more deserving of our sympathy and aid.

Furthermore, the subject recieving the 'B' grade is Arts and Crafts, which, at least in the conventional Singaporean mindset, is not a subject of critical importance (such as English, Maths and Science). Hence, the fact that the grade is less than sterling is at least acceptable.

If we accept the last point, then we might also want to examine why the report card reflects an 'A+' grade in Malay. Is there any message hidden inside this 'A+'? My first thought would be that this is a stereotype of Malay students as having, at least compared to Chinese students, a high level of proficiency in their Mother Tongue. My second thought was also along racial lines. Specifically, I asked the question, why a Malay student (in the ad) rather than one of other races? My question should not be construed as a racist question, but rather, as a question of whether racial stereotypes have been used (by the ad) in order to make the ad more effective.

Since race is often a tricky subject, let me clarify my last point. Now, consider an alternative pocket money fund ad. This time, the student is not a malay, but a caucasian. Would the ad then be more or less effective? My suspicions would be that the ad is less effective, because our racial stereotypes compel us to imagine of caucasians as being well-off. Now, my question would be whether malays are stereotyped to be the reverse.

Despite my thoughts regarding the ad, I still believe that the Pocket Money Fund is a cause worthy of our attention. My belief is that giving to children yields a significant future benefit to society.
Posted by The Negative Man at 10:59 AM