A war was waged, for the most mundane of reasons, in the most unlikely of places - a lecture theatre. The instigator of the war, motivated only by a need to satiate his boredom, thus began the FOOD WAR.

The 16 contestants, called from the recesses of the minds of the mad, fought for votes from the panel of bored judges. 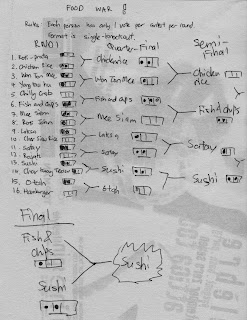