I am going to show you an image. Just note down your responses to it. 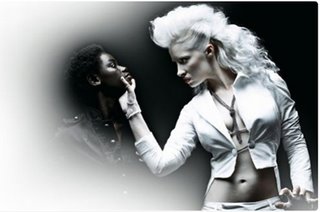 Now, I am going to show you the full image. 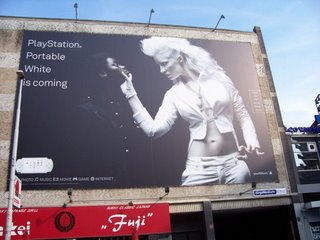 Did you feel offended by the first image? If so, did you feel the same, less, or more offended when it was revealed to be an ad?

This ad, which promotes the PSP white, was displayed only in Holland. Interestingly, it didn't cause much of a hooha in Holland. However, the ad was quickly spread on the Net where it upset some.

Is it racist? Does it have racial overtones to it? Probably not. As I have written previously, everything will be intepreted differently by audiences from dissimilar backgrounds. The ad might be offensive in America, with its history of racial tension. This might not be so in Holland, where racial issues are not salient.

I first learnt of this ad from Crtl+Alt+Del, a webcomic I read regularly (although the comment on the ad was in another section, not the webcomic itself). One comment which stands out is:

It would be nice if we lived in a world where anyone looked at that billboard and all they saw was two people.

You can read the rest of his words here. 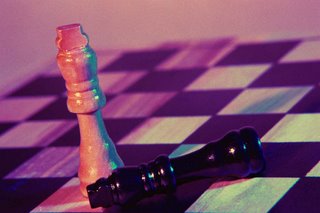 Black and white may not be that sensitive in Singapore; if the ad were to feature two persons of different ethnic race in Singapore, then it'll probably cause an uproar.

This reminded me of a particular grumble by Lee Chee Chew (the guy in ST who draws the Chew On It! comic strip) in his now-defunct blog. He was commissioned by some government department to draw a strip promoting something (I forgot what... I think it's about reading or something like that). When he floated the strip for review, there were all sorts of complaints, such as, why is the Sikh child wearing glasses while the others are not, and why is the Chinese telling the Malay to read more? (More or less along these lines.)

Interestingly enough, in the end it turns out that the Chinese doesn't seem to mind being placed at the "discriminated" end of the comic, which was how he eventually drew it. So perhaps the minority races in a society are more sensitive when it comes to such issues.